The Stronghold Siege is an event / raid. This raid can also be referred to as “STC”, which is short for “Storming the Castle”. STC is a quest obtained from the Master of the Coin, located in the Stronghold.

You must be Level 20 to participate in a Stronghold Siege.

Accepting The STC Quest – I will lay out the STC (Storming the Castle) quest further below. It is extremely important to accept this quest before entering an organized Siege – the quest will grant bonus awards such as Vouchers and Rough Astral Diamonds upon Siege Completion.

Build & Destroy – The goal of Siege itself is to destroy the enemy team’s castle. You can do this through building catapults close by the enemy’s castle – however, you’ll need some supplies for that!

About Supplies – You can gather supplies by;

Once you have supplies, you want to run them to the center front catapult, that faces onward to the opposing castle. Your teammates will claim the middle lane – and once that is captured, you may start building your Catapults.

Catapults – When a Catapult is fully built (this requires x4 Supplies), they will need restocked with further supplies. It is important to keep donating and hunting for Supplies – the catapult will run out of boulders to toss if not, which therefore halts the ongoing destruction of the enemy castle.

Storming the Castle (STC) is a quest obtained in the Stronghold from the Master of the Coin. It’s task for completion is very easy – complete a siege event. Upon completion, you earn several valuable rewards. This quest is acceptable once a week per character – meaning it can be done several times a week per 1 account.

Here is a list of rewards you earn from STC: 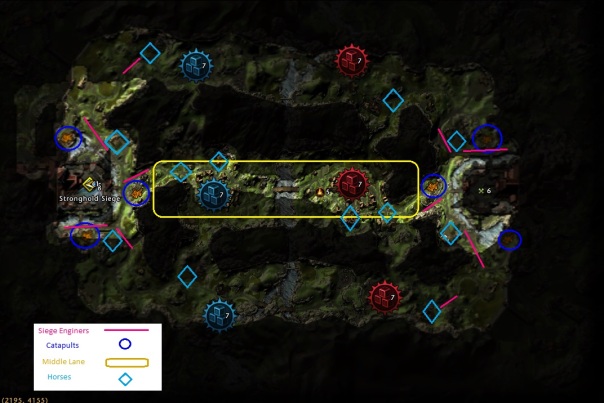